Beware property managers, some of the most unwelcome residents these days are Canada Geese, who once they settle in, don’t want to leave. In late winter, they battle for mates and choose nesting sites. In spring, they nest and raise young. In summer and fall, many become permanent residents. Year round, they devour turf, damage property, and inconvenience or even terrorize tenants, residents, and customers. Don’t wait till they build a nest—Push these perfidious pooping protagonists off your property NOW!  If you have Canada geese on your property for more than a day or two between April and August, they are almost certainly the non-migrating ‘resident’ nuisance geese. True migratory geese might stop and rest,but rarely for more than a day. If the geese are nesting and laying eggs, they are DEFINITELY the nuisance variety; the true migratory birds do all their nesting up in Canada. You might find a few ‘real’ ones up in the far Northern reaches of the U.S. at nesting time and you might find some lazier ‘snowbirds’ staying as close as the deep South over winter; but in the rest of the U.S., birds that stay for more than a day or so are non-migrating ‘resident’ geese. If your wondering, Where did these pests come from? Back at the turn of the Century, hunters used captured birds as live hunting decoys. When the practice was outlawed in the 1930’s, they let these ‘decoy geese’ go free, but the birds had lost the instinct to migrate. Then these domesticated birds were deliberately relocated to virtually every state in the union for hunters, a practice known as ‘state swapping’. The result is millions and millions of really BIG birds that now stay in one place instead of flying from Canada to Mexico every year.For commercial and residential property managers, these geese present a number of hazards. Besides the potential for aggressive behavior toward tenants,  residents and guests, each goose can eat up to three pounds of grass per day. A small flock can quickly render grassy spaces unusable, leaving them stripped bare,prone to erosion, and covered with feces. The costs of repairing overgrazed areas and the cleanup of goose droppings (each can leave up to two pounds per day) can be substantial, and the nitrogen content in the droppings can contribute to excessive algae growth in bodies of water. Direct contact with droppings also poses health risks, including pathogenic bacteria such as E. coli, as well as slip-and-fall liability hazard. They love manicured lawns, and will go elsewhere if you grow something more like a meadow, wildflower field, or butterfly garden. If they’re entering your property from a pond, planting shrubs or building a wall along the shoreline will often deter them. 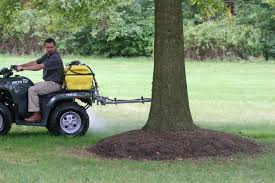 There is a new product on the market called Flight Control, unlike traditional scare tactics, this spray is the only product that effectively protects turf areas seven days a week, 24 hours a day. It works in two ways, first by sending a visual warning (geese see it, but humans don’t), then by delivering a harmless, but effective gut reaction if they feed. Odorless and weatherproof, the EPA-approved goose repellent uses a naturally occurring, environmentally safe compound called anthranquinone (AQ) formulated by Arkion Life Sciences www.flightcontrol.com. It works first by giving geese that feed on treated turf a harmless digestive irritation, indicating that something is wrong with the food source. The applied compound also absorbs ultraviolet light, which only geese can see.  This creates a visual signal the geese immediately link to their stomach irritation, caused by feeding in the area.The combined effect teaches geese to recognize and avoid grassy areas treated with flight control. The Canada geese “move out” in search of a better food source. Problem Solved!! The best way to keep geese away from your property or pond is to use a combination of products. By placing a liquid deterrent around the edges of ponds and near your buildings or populated areas along with installing decoys in key locations, you can effectively prevent geese from ever returning. Add in netting and wiring in select locations and the only place you will see geese is flying majestically overhead.